A Rousseau specialist came to the aid of Kelly Tractor, a Caterpillar equipment dealer, and really pushed the boundaries of what a storage system can do. A combination of multi-level shelving and drawers in shelving were used to design the ideal solution for the company: efficient and scalable storage that can grow with the company.

CHALLENGE
The company had too many parts for their available storage space and wanted to increase their storage capacity by 25% to make room for new equipment and parts. All this had to be done without expanding the building and keeping the warehouse operational.

OBJECTIVE
Use the various storage products available so that each part number has a specific location, while retaining some of the existing shelving and cabinets and creating 25% extra capacity for future expansion.

ROUSSEAU SOLUTION
Like many other companies, Kelly Tractor in Miami, FL, was looking to expand its warehouse capacity substantially without enlarging the building itself.

Kelly Tractor’s warehouse was using outdated cabinetry and shelving that was not providing adequate storage. John Sarnecki, manager of the parts department in Miami, described it thus, “We were at the point where we had about 55,000 part numbers but we only had 50,000 locations available.” So, he started looking at the various solutions available. After a few unsuccessful trials with another company, John asked Caterpillar if they could recommend a manufacturer. They recommended Rousseau Metal Inc. He therefore began to work with Dave Shank of Deluxe systems, a Florida-based distributor specializing in Rousseau products.

Two main goals needed to be taken into account for this project: each part had to have its own unique storage location, and an extra 25% of storage capacity needed to be provided. Speaking of working with John Sarnecki’s team, Dave Shank said, “They were open-minded. It allowed us to propose a different solution than what they had initially considered.” He subsequently proposed a customized solution combining modular drawers in Spider® Shelving and Rousseau mezzanines. 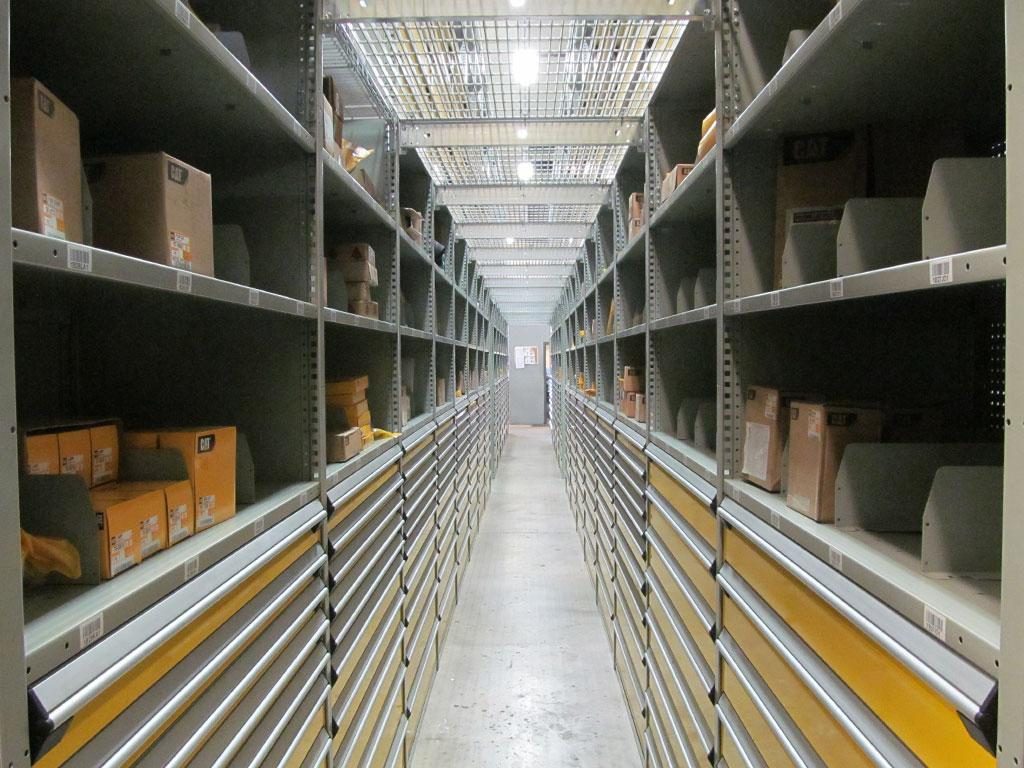 The shelving drawers provided high-density storage while larger parts could be stored on shelves. John explained, “One of the things that most Caterpillar dealers are mostly concerned with is cleanliness. This system enabled us to have a lot of our parts out of open shelving and in the drawers, which improves the need for contamination control.” Furthermore, the addition of a mezzanine and deck-over shelving helped Kelly Tractor to substantially increase its storage and expansion capacity, while retaining some of the cabinets and shelving they already had. Dave indicated that the expansion capacity had even exceeded their initial expectations. This system also allowed the full height of the building to be used. Before Rousseau products were installed, the full height of the building was not being used because objects stored on top of the shelves were only accessible by man lift. A second level helped to maximize storage by using all available space and effectively doubled the square footage being utilized. 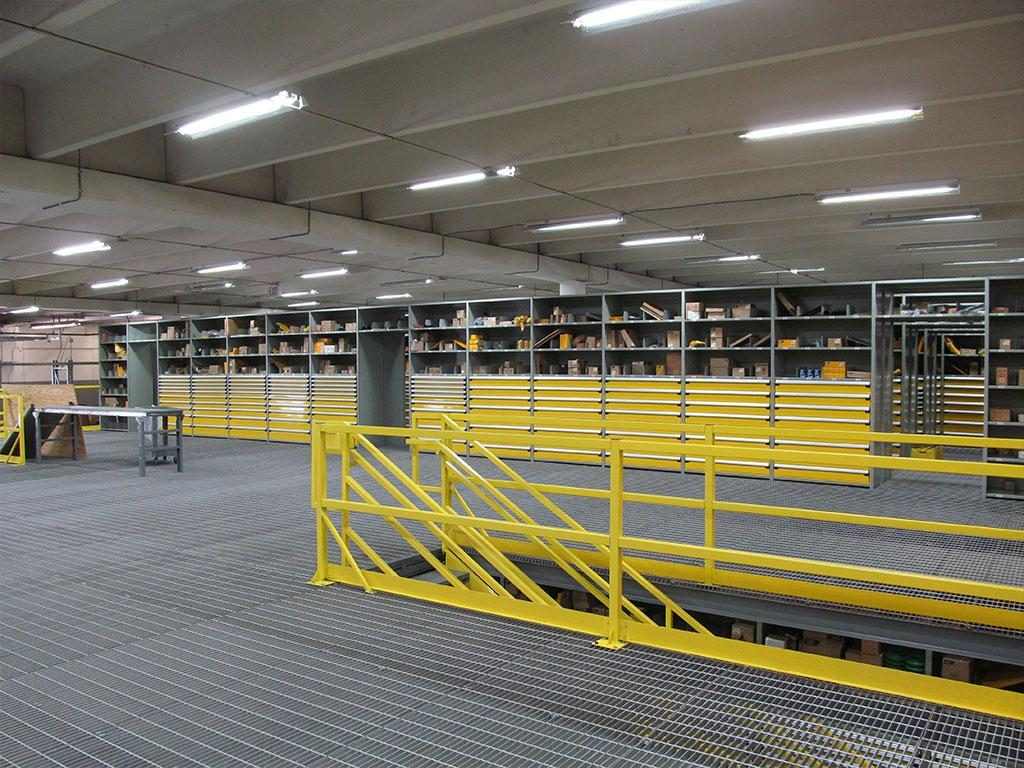 The flexibility provided by Rousseau products is undoubtedly the major attraction for the Kelly Tractor team as well as Deluxe Systems, as John Sarnecki confirms, “Today I don’t know what size parts we’re going to be needing. This system right here is very flexible. If I need bigger locations, I can make it with bigger locations. If I need more drawer space, I can always add more drawers.” Dave Shank adds, “The mix of products that Rousseau has available to us gives us so much more flexibility in how we can design and implement projects for our customers.” 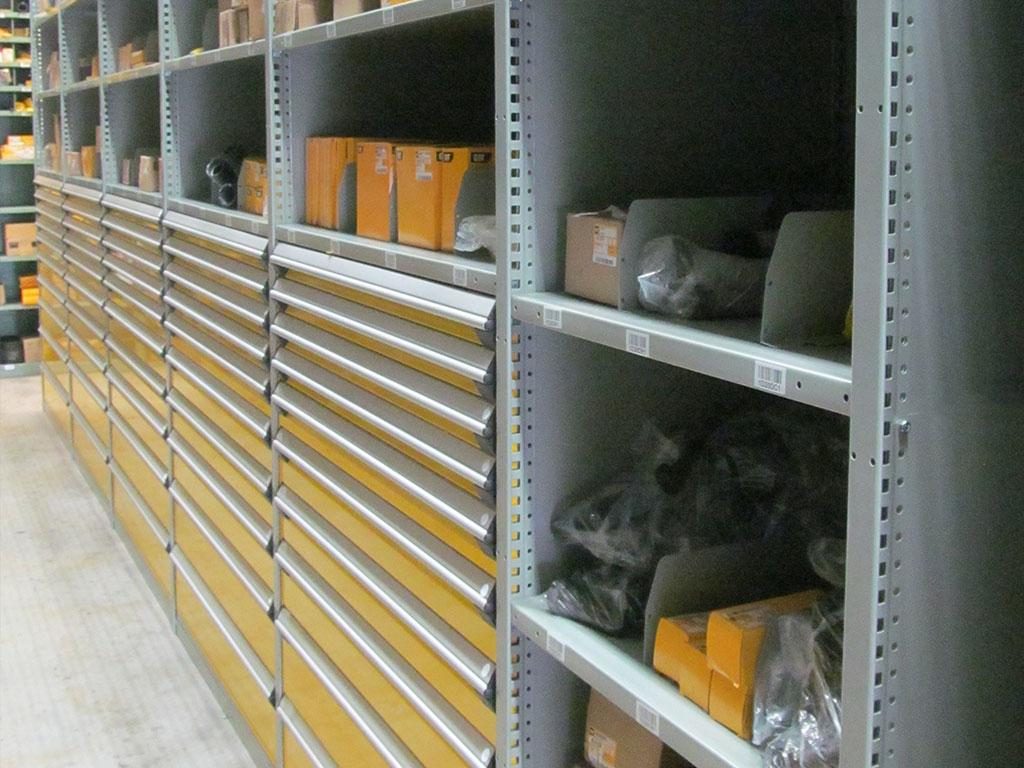 One of the other challenges encountered in this project was the logistics of installing the units. The warehouse had to remain operational and open for the duration of the project. Dave Shank therefore put together a three-phase plan. The timeline was a crucial element of this project. John recalls, “I think the best thing that Rousseau did was when they said they were going to do something, they did it. We were on a very tight schedule because it was a working warehouse. We said that we were going to be needing the first cabinets on June 1st, and on June 1st the cabinets were there.” John added that the Deluxe Systems team was very professional, which meant that the hazards associated with such a project were well managed.

In short, Kelly Tractor’s project was a big success. The choice of Rousseau products ensured that every part had its own storage space and the initial expectations for expansion capacity were not only met, but exceeded.

This entry was posted in Small Parts Storage. Bookmark the permalink.